Rethinking Liposuction as a Functional Procedure

Bronwyn*, 48, had liposuction four weeks ago, and she can’t believe how much it’s changed her day to day life already. Realising she’d put on a fair bit of extra weight by the feeling around her inner thighs, an area where many women struggle to move weight, Bronwyn knew she had to do something about it, so she launched into her usual diet and exercise regime but was soon left feeling frustrated.

“This was something I’d never experienced before. I’ve been overweight before and been able to lose it, but this was different. It felt like I had a tennis ball between my thighs constantly and it started to impact my everyday life. If I went to walk my dogs, I’d get chafing and things like that and I really felt my movement was restricted. Mentally, I felt restricted too – I’d wake up thinking about what I could wear to make myself more comfortable so I could exercise, but nothing felt right.  It was a constant feeling of discomfort, even if I was just sitting on the couch at home, because I could feel it there with every movement I made.”

She hadn’t initially realised that liposuction was an option for her, having always thought that it was purely an aesthetic procedure for people who were close to their goal weight and just needed to remove a stubborn area of fat. 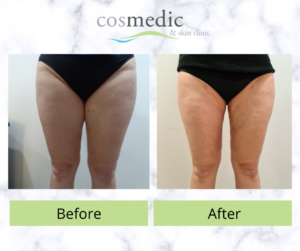 “I knew I wasn’t close to my goal weight at all, and I was bigger than I’d ever been. I just thought liposuction was only for appearance, and not for a functional reason like regaining normal movement. It didn’t dawn on me straight away that it was something I could do, but I didn’t know what else

to do because I needed it gone then and there. I knew I couldn’t wait six months hoping the weight would come off where I wanted it to, because it never does! This type of weight gain was a constant reminder because I could feel it every time I moved my body. If I’d put weight on somewhere else, it wouldn’t have mattered as much because it was the restriction of movement that bothered me, not the look.”

When the idea of liposuction came to her, Bronwyn knew she wanted to do it so she could have a feeling of normality back and feel comfortable in her body. She booked a consultation at Cosmedic & Skin Clinic to see if she was a candidate and was happy to find out that she was.

“My consultation was amazing. I wanted to go with practitioners who really knew what they were doing and would give me all the information I needed. I learned so much, especially about how your legs are structured. Even if they have the same amount of fat the entire way around, it’s the inside of your thigh that really sticks out because the skin is so much more elasticated there. That’s what amazed me the most because it was an anatomical explanation for this horrible sensation I was living with. I felt confident going ahead after that, and I was told about maybe having saggy skin afterwards but I honestly didn’t care about that. You can choose to have Bodytite skin tightening either during or after liposuction, but I chose not to. It wasn’t about the appearance for me, it was purely functional, and, in the end, I was lucky that my skin bounced back anyway.”

Bronwyn’s recovery was straightforward, and she was pleasantly surprised by the other benefits she experienced from the liposuction procedure.

“I’d be happy to do it again knowing what the recovery was like. The day after I took it quite easy but I was still up and walking around. Personally, I believe you heal better when you’re moving around but just don’t push yourself too far. I had three days off before going back to work but didn’t need more than just some paracetamol on the first day. I had to be careful with bending down to do things like feeding my dogs, but if I was gentle, it was fine. You have to wear a compression garment for two weeks and you can definitely feel it, but it’s more like that sensation of knowing you have had a procedure rather than being actually painful. In terms of scarring, there were two little incisions from the cannulas, and I had a bruise, but now I don’t think you can see anything.

I just can’t get over the difference, and you really notice the difference everyday. All I wanted from my liposuction was to remove that pocket of fat that felt like a tennis ball rubbing between my legs, but now that it’s gone, I’m starting to notice other things as well. I’ve never had very shapely legs, no matter what weight I am, so I was surprised to be able to visually see how good they look! They look more sculpted now than before and when I walk past a mirror I think – oh, THERE are my legs! I also wasn’t aiming for a thigh gap at all, it wasn’t a priority to me but has been a really nice addition to how good I’m feeling.”

Bronwyn’s experience really calls for a need to reframe liposuction as a functional procedure, not just an aesthetic one. The modern approach to liposuction is to really tailor the procedure to the patient’s individual needs and goals, and for Bronwyn it was a procedure that really positively impacted both her physical and mental health.

“I’m so much more motivated now to continue with looking after my health and controlling my weight. Mentally, I was really struggling with the feeling of being restricted and having that constant discomfort because of the extra fat between my legs. With that gone, it’s such a huge pick me up and I’ve actually lost another 5kg in the month post-surgery and have been sticking to a keto diet in combination with exercise which is really working for me. I needed that fat gone to be able to really get past that mental block, and I’m so happy with my decision.”

Her words of wisdom for other people considering liposuction were simple and empowering:

“If you’re thinking about it, have a consultation! You really can’t decide on anything until you’ve had a consultation. Get your information from the consultation. Take the advice of the professional – a lot of my friends said, “you’re not doing that are you?” but the point is that they’re my legs, it’s my body and it’s about how I feel. Someone else might be the same size as me, but the weight isn’t in that same spot so they can’t really comment on how I feel and what I’m having done. I think when you listen to somebody else, their experience is always very different to yours. I think you’ve got to get the right information and make that decision for yourself. It’s about you and why you’re doing it, not why someone else has done it or what someone else thinks.”

Any surgical or invasive procedure carries risks. Before proceeding, you should consider seeking a second opinion from an appropriately qualified health practitioner.

All surgical procedures carry risks. Before proceeding, you should seek a second opinion from an appropriately qualified health practitioner.